BRADENTON – Leah Paskalides was fairly new as an adoption caseworker for the Safe Children Coalition when she met Monyay – the 19-year-old woman she now calls daughter. 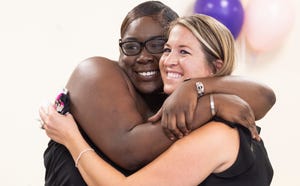 “When I started in adoptions in 2015, she was one of my first cases and at first she did not like me,” Leah said, shortly after the roughly six-minute April 27 adoption hearing, held via Zoom with 12th Judicial Circuit Judge Teresa Dees presiding, in which Monyay Faith Randall officially became Monyay Faith Paskalides.

The ceremony, which made national television news, was a mixture of giggles and laughter – including when Monyay spelled out her new last name – as well as hugs and tears.

Tears of joy, as Monyay had what she called closure.

“To me, this is something I always wanted, I wanted closure,” Monyay said. “When I was in foster care, I regretted not being adopted.

“Now, here’s my chance, I didn’t want to miss out this time,” she added. “Like I tell most kids in care: Don’t give up hope – I did spend six years in care, it’s never too late, I’m grown but I’m still being adopted.”