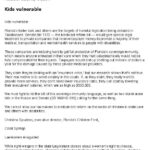 May 1, 2011 Florida’s foster kids and others are the targets of harmful legislation being debated in Tallahassee. Senate Bill 1972 — the Medicaid reform bill — would give special legal treatment to private companies that receive taxpayer money to provide a majority of their medical, transportation and mental-health services to people with disabilities.

These companies are lobbying hard to get full protection of Florida’s sovereign immunity, which means anyone entrusted in their care whom they hurt catastrophically would not be fully compensated for their injuries. Taxpayers would end up shelling out millions of dollars a year for the damage caused by these private Medicaid providers.