Give foster kids their own attorneys? Florida Guardian ad Litem opposes it. 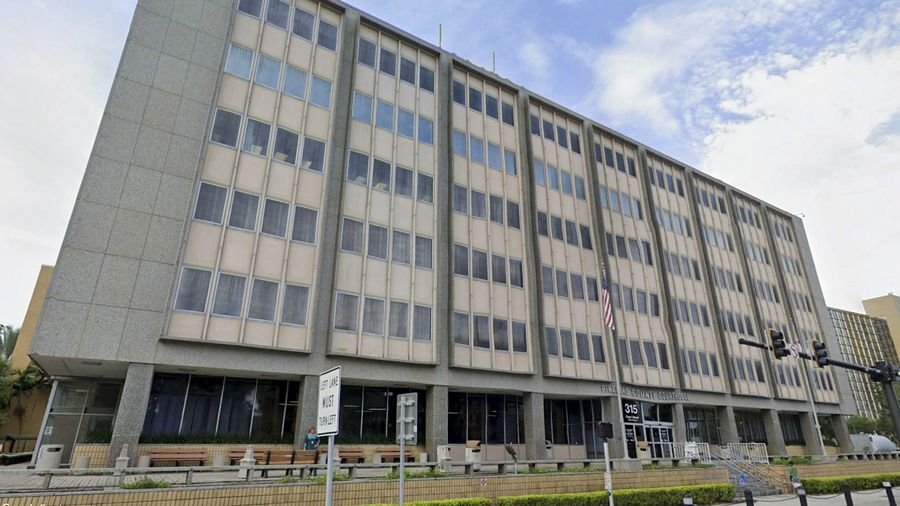 What is the best way to represent minors in Florida’s child welfare system? A pilot program that would have given foster kids their own attorneys was vetoed.

Providing foster children with their own attorneys as they navigate Florida’s child welfare system is considered best practice by some experts and is recommended by the American Bar Association.

So a $2.4 million pilot program to give every foster kid in Broward and PalmBeach counties their own attorney was seen as a first step toward changing how children are represented in Florida’s child welfare system.

But the Child Representation Pilot Program was vetoed by the governor. Advocates say it ran into a formidable foe: the Florida Guardian ad Litem agency and its charity arm.

The agency, which will receive about $60 million in state funds in 2023, provides trained volunteers known as guardians to advocate for foster kids in court and employs attorneys who provide “best-interest” legal representation in more complex or disputed cases. Its leaders have long maintained that it is the best model for representing Florida’s foster kids.

State law prohibits the agency from using tax dollars to lobby — but that law doesn’t apply to its charity the Guardian ad Litem Foundation, which state records show has paid for lobbyists since 2015.

The foundation’s lobbyist, Capital City Consultants, was paid $7,500 for its work during the legislative session. Foundation board president Lori Duarte-Roberts said that did not include lobbying against the pilot program. That was confirmed by Capital City lobbyist Ashley Kalifeh.

But the foundation did oppose the pilot program. Records show Duarte-Roberts sent at least two emails to supporters asking them to call the governor’s office and urge him to veto the program.

“It seems the only purpose of this ‘pilot’ is to lay the foundation to change Florida’s policy on representation,” she wrote in one message. The Guardian ad Litem agency also ran a social media campaign touting its success representing children. The pilot was among $3.1 billion in line-item vetoes from Gov. Ron DeSantis. 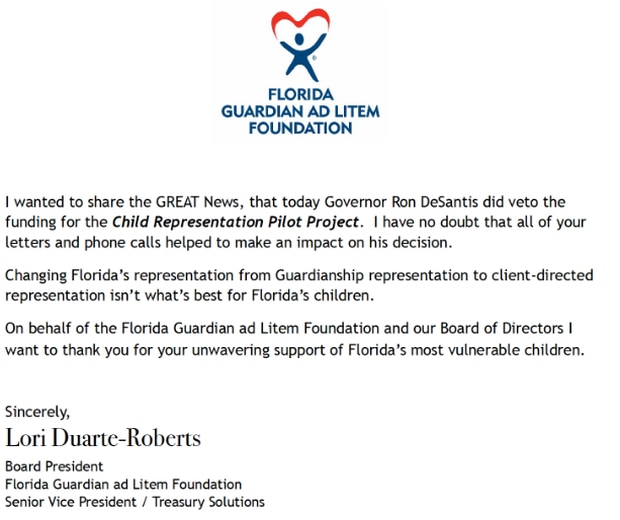 Its demise is the latest salvo in what has become a heated dispute about how to best represent children in Florida’s child welfare system.

Sarasota attorney Wendy Cox, who has been a guardian, represented children in court and raised money for her local Guardian ad Litem office, said she’s frustrated by its opposition to letting children have their own attorneys.

“Where this antagonism comes from I don’t know,” she said. “It might be a budget issue — the more programs there are to support kids, the further the budget needs to be stretched out between programs.”

Supporters of giving children their own attorneys say Florida’s current model is flawed.

Guardian ad Litem attorneys, if present, advocate in court for what the agency determines is in the best interest of the child. But their client is the agency, not the child.

A 2020 review of the Guardian ad Litem agency by the state’s Office of ProgramPolicy Analysis and Government Accountability expressed doubts about Florida’smodel. Using trained volunteers is not an evidence-based practice, the study said.

It also found that the agency had hired almost 140 new employees since 2016, but the percentage of children being represented had fallen by 10%. That left a third of Florida’s foster kids without an advocate.

Another concern was that Florida’s volunteer guardian model — it has around13,000 volunteers statewide — does not meet guidelines to qualify for federal funding from the Children’s Bureau, a federal agency within the Office of theAdministration for Children & Families.

Broward and Palm Beach counties were chosen for the pilot program because they already provide an attorney for about a third of their foster kids through local Legal Aid offices with funding from property taxes.

Supporters of giving children their own attorneys are irked that the Guardian ad Litem agency and its foundation opposed the pilot program, which they say wouldn’t have affected the agency’s funding or role in foster care. Child attorneys and guardians already work together in Broward and Palm Beach, said Walter Honaman, a children’s attorney with the Legal Aid Service of Broward County.

“It’s too bad the state has missed an opportunity to show that full representation for children in care with direct attorneys and guardians will result in the best outcomes,” he said.

Guardian ad Litem officials say statistics show that Florida foster children are either reunited with parents or adopted more quickly than in states where children are represented by attorneys.

But it’s unclear how much that can be attributed to the work of guardians since the state report noted that the agency used statewide data that included children that aren’t assigned a guardian.

“We are proud of the amazing work done by the Florida Guardian ad Litem Office, which has led to some of the best outcomes nationally,” said Melissa Bujeda, the agency’s director of communications.

The pilot also drew criticism because it was inserted into the state budget late in the legislative session. The action came after a bill filed by State Sen. Lauren Book, D-Plantation, to create a Statewide Office of Child Representation with authority for judges to authorize and appoint child attorneys, died in committee.

Roy Miller, president of Tallahassee nonprofit American Children’s Campaign, said inserting the legal program into the budget was an attempt to bypass critical review of the proposal: “This issue has been debated for two years through the legislature, and policy was not passed.”

Capital City Consultants, the lobbying firm used by the Florida Guardian ad Litem Foundation, touted its success in this year’s legislative session in a report that mentioned the pilot program. It also touted a “huge win” obtaining up to $4 million for the Guardian ad Litem agency via federal funds to pay for an additional 65 employees to provide legal representation for foster kids.

That money would enable the agency to provide guardians for every child in Florida, the agency said. But that depends on the state convincing the federal government that its use of guardians qualifies Florida for funding.

Honaman said his time working in child welfare has convinced him that children need their own attorneys in dependency court.

He used one of his own cases as an example:

A mother whom guardians felt should be stripped of her parental rights because her children had been exposed to domestic violence. The woman filed for divorce and sought a restraining order to keep her husband away.

Honaman was the attorney for her 14-year-old son, who wanted to live with his mother. The judge granted the son’s request, the attorney said — going against the recommendation of the boy’s guardian.

He said the agency’s use of volunteers often attracts well-meaning affluent retirees who sometimes wrongly advocate against reunifying families because they equate poverty with neglect.

“Poverty is not a reason to keep families apart,” he said.