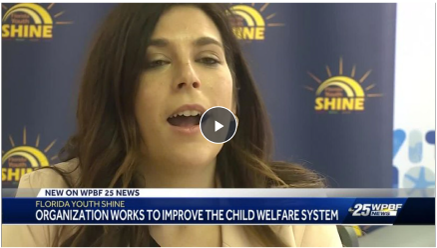 Navigating the child welfare system can be challenging for many kids, whether they’re adopted or in foster care.

A statewide organization called Florida Youth Shine is dedicated to advocating for those children by amplifying their voices. It was founded in 2005 by Florida’s Children First.

“At the age of 16, I was taken from my home and placed into the foster care system. The day that I entered care was the day that I lost about 90% of my rights,” Rebekka Behr, the statewide chair for Florida Youth Shine, said.

Behr was moved from her home in Loxahatchee and spent the next two years in a group home near Lake Worth Beach. She said her caretakers there caused her to miss weeks of school and stopped her from speaking to friends and family.

When Behr turned 18, she enrolled at Florida State University in Tallahassee.

After aging out of foster care, she was assigned an independent living specialist from Vita Nova, an organization that functions as a safe haven for homeless and foster care youth.

Through the specialist, she was introduced to Florida Youth Shine and wanted to get involved.

“In order to make differences in the lives of children, we realize that youth that have been through the foster care system need to be the ones that are informing it and helping solve some of the biggest problems, so it’s completely youth-led,” Geori Seldine, the executive director of Florida’s Children First, said.

Seldine said FYS’s youth leaders have made monumental changes in the foster care system that have bettered the lives of children.

Behr is part of that change. She’s served five years with the organization, the last one as the organization’s statewide chair, and she’s hoping to make even more of a difference.

“Having us not only at the table but being in those positions of leadership to take action allows for things that have happened to us, no longer happen to those in care,” Behr said.

Florida Youth Shine has 14 chapters across the state, including Vita Nova in West Palm Beach.

Those seeking membership must be between the ages of 13 and 26, involved in the child welfare system, or is experiencing homelessness.