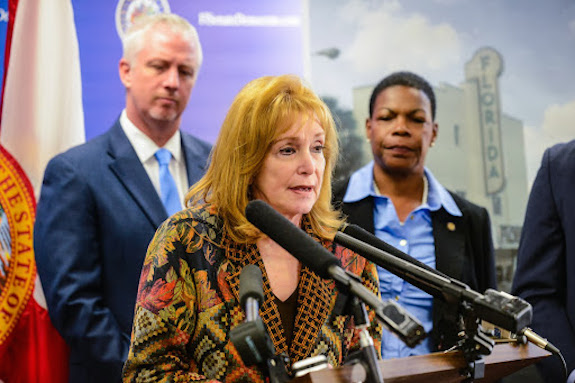 Legislation aimed at fixing the state’s troubled child welfare system is making its way through the Florida Legislature, despite a couple of hurdles.

This year, state lawmakers vowed to change how the state protects vulnerable children.

Several weeks ago, The Miami Herald published its “Innocents Lost” series—a heartbreaking and massive public records project chronicling the nearly 500 deaths that happened under the Florida Department of Children and Families’ watch since 2008. In the wake of that reporting, state lawmakers have been working to pass reforms.

However, it’s been a rocky road for the legislative effort.

Last week, the Florida Senate passed its version of child welfare reform, but only after a bit of a struggle following a late-filed amendment from the governor’s office.

According to The Miami Herald/Tampa Bay Times:

Minutes into the Senate debate today on the SB 1666, the Senate’s overhaul of the child welfare laws, a last-minute amendment appeared today after being shopped by the Department of Children and Families and the governor’s office late yesterday.

Sponsored by Sen. Alex Diaz de la Portilla, the 135-page amendment so late in the process was significant enough to prompt Sen. Andy Gardiner to call for a time out to give members time to absorb what the proposal would do.

The “strike-all” amendment would make several significant changes aimed at tamping down some of the provisions and oversight over the department, according to a document obtained by the Herald/Times. The summary of the amendment says many of the reforms would cost too much money.

However, according to the Herald/Times, the amendment was withdrawn at the last minute, which paved the way for its final passage.

According to the Associated Press, the bill (SB 1666) passed 37-0 — and adds more than $47 million for services, hires nearly 200 new investigators and places “an emphasis on child safety above family reunification.”

Senators pushed through more than a dozen late filed amendments Friday to bring their bill in line with a companion bill in the House. The amendments addressed everything from keeping siblings together in foster homes whenever possible to requiring DCF to post child death information on their website in an effort to improve transparency and placing a preference on putting children in foster homes instead of group homes and institutions.

… For several years, DCF has placed a premium on putting fewer children in foster care and, instead, offering family services while the child remains at home. Experts say there are gaps in those services and lax enforcement, usually nothing more than a verbal agreement from a parent to stay away from an abusive spouse, attend parenting classes or to quit drugs. But a new amendment stressed that safety plans can no longer rely on verbal promises from parents.Earlier this week, House and Senate Health and Human Services Appropriations conference committees approved $13 million to hire nearly 200 new child protective investigators in hopes of reducing caseloads and high turnover. It’s much less than what Gov. Scott proposed. The bill also seeks to professionalize the workforce, employing higher caliber staff with experience in social work.

The proposal also carves out $5 million for at-risk families with young children who need substance abuse treatment after advocates complained the lawmakers had overlooked funding to treat mental health and substance abuse problems that are at the root of most child deaths.

The News Service of Florida reports that the bill’s next step is to pass through the more conservative Florida House.

According to the News Service of Florida, the House’s version was ”unanimously approved by the House Appropriations Committee on Tuesday.”

Overall, both chambers’ bills require more transparency from DCF about child deaths and more accountability from the lead community-based care agencies. Both would use tuition waivers and loan forgiveness programs to help front-line staff get their social-work degrees.

The bills would create rapid-response teams to conduct immediate investigations of child deaths, establish the Florida Institute for Child Welfare to conduct policy research and create the position of assistant secretary for child welfare at DCF. Both would keep siblings together and medically fragile children in their communities whenever possible.

Gov. Rick Scott has already voiced his support for child welfare reform. Despite the late-filed amendment effectively gutting parts of the Senate’s bill, it is likely any bill that makes it to Scott’s desk during this legislative session will be signed into law.